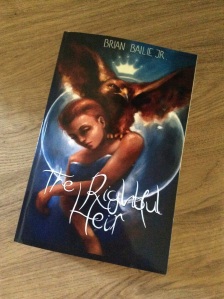 Who doesn’t love a jolly good tale of action and adventure!  If like me you love a page turner, you will adore The Rightful Heir by Brian Bailie Jr.  Here’s the synopsis,

“Owen Badon, the last member of the British royal family to survive the Roman invasion, has come home to Great Britain to free his people. He is aided by an elite unit of special forces that act as his knights, along with a unique American task force, and the mysterious spy, code-named Ice Swan. During a meeting with a resistance group of Victorian-inspired punk rockers known as the Chords, King Owen encounters the noble and elegant Queen Caesaris who was placed on the throne by her father, who is Caesar. The two unlikely young monarchs form an alliance that grows into something deeper between them than either ever imagined. Set in and around London, The Rightful Heir is an epic tale of war, romance, espionage, subversion, and intrigue during a rebellion in the not too distant future.”

This book is like nothing you’ve ever read before I can guarantee that! It’s a tale of good and evil in a completely unique guise. Told from a grounding in the historically accurate Roman occupation of Britain, but set in the future, Bailie takes you on an intricate journey. I can promise you modern day cowboys, masquerading as special forces, a sex symbol aristocrat (if this is ever made into a film, and it should be, I vote Damien Lewis or Clive Owen for the lead!), a Bond girl style queen and action and adventure on every page!

This is one of those books that leave you wanting more, wanting to visit the places you’ve read about (if you are not familiar with London I can imagine you would probably want to visit after reading this book!) and wanting another offering from the author as soon as you turn the last page.

A fantastic book, a great read and a lasting adventure.

You can purchase The Rightful Heir from Amazon here